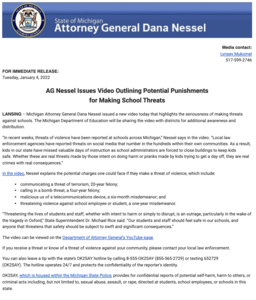 LANSING – Michigan Attorney General Dana Nessel issued a new video today that highlights the seriousness of making threats against schools. The Michigan Department of Education will be sharing the video with districts for additional awareness and distribution.

“In recent weeks, threats of violence have been reported at schools across Michigan,” Nessel says in the video. “Local law enforcement agencies have reported threats on social media that number in the hundreds within their own communities. As a result, kids in our state have missed valuable days of instruction as school administrators are forced to close buildings to keep kids safe. Whether these are real threats made by those intent on doing harm or pranks made by kids trying to get a day off, they are real crimes with real consequences.”

In the video, Nessel explains the potential charges one could face if they make a threat of violence, which include:

“Threatening the lives of students and staff, whether with intent to harm or simply to disrupt, is an outrage, particularly in the wake of the tragedy in Oxford,” State Superintendent Dr. Michael Rice said. “Our students and staff should feel safe in our schools, and anyone that threatens that safety should be subject to swift and significant consequences.”

The video can be viewed on the Department of Attorney General’s YouTube page.

If you receive a threat or know of a threat of violence against your community, please contact your local law enforcement.

OK2SAY, which is housed within the Michigan State Police, provides for confidential reports of potential self-harm, harm to others, or criminal acts including, but not limited to, sexual abuse, assault, or rape, directed at students, school employees, or schools in this state.